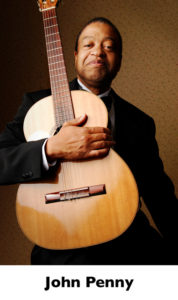 Minneapolis based guitarist and composer John Penny performs his original music on stages throughout the Twin Cities, and has performed in nightclubs in New York City from Harlem to the East Village. A wealthy amount of his music fuses Jazz with Classical and World Folk genres. His CD collection entitled Urban Tumble includes two pieces that morph between Jazz and orchestral ensembles. Of late, music of the orchestral nature has surfaced as his primary focus. Mr. Penny has composed music for numerous TV and radio commercials with such clients as Best Buy, Frito-Lay, and Group Health. Clients for corporate films including Honeywell, the Minnesota Twins, and United Way offered him opportunities to compose orchestral scores. John earned a BA in music from the University of Iowa. He holds a graduate certificate in Management Information Systems from Metro State University in St Paul, MN reflecting a time when music and corporate computer systems shared his attention.
READ MORE ABOUT JOHN PENNY: johnpennymusic.com

I was deeply affected by reports on the growing number of children that lose their lives each year through armed conflict, starvation, and other related tragic circumstances that children should never have to endure. I was moved to compose Scenes From Heaven’s Little Faces in memory of all children who are tragically taken from us. The scenes portrayed in this piece were conceived as my reaction to what I might observe if I were able to look in on these precious young souls as they arrive and reside in the plane of existence known as heaven. I returned to this process periodically for guidance while allowing Scenes From Heaven’s Little Faces to materialize. —John Penny