Jo Anne has been the flutist of the Sinfonia and the former Minneapolis Chamber Symphony for 40 years. Growing up in New York, she started playing the flute at age 9, and after high school graduation, she went to Boston to study with James Pappoutsakis. Upon graduating from Boston University, Jo Anne went on to Paris where she was a student of Michel Debost and the renowned teacher of theory and composition, Nadia Boulanger. This was one of the highlights of her musical journey.

Over her career, Jo Anne has played at various venues including Northrup Auditorium, the Ordway, Excel Energy Center, and the Target Center; performing for ballets, musicals, Luciano Pavarotti, and The Moody Blues.

When she is not performing, Jo Anne works full time at a bookstore, where she has been for 24 years. She is an avid reader, loves baking with her daughter, working outside, walking on the Luce Line Trail, and playing with her precious cat, Dany. 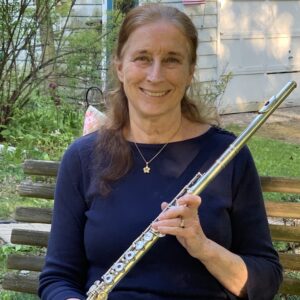