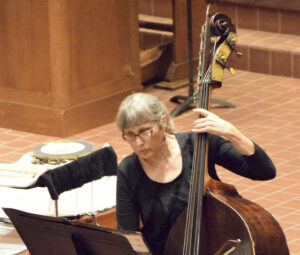 Originally from New Jersey, Jennifer Rubin, has been the double bassist with the Sinfonia since 2009. She received her Bachelor of Music and Master of Music degrees from the Julliard School in NYC where she studied with Homer Mensch.

After moving to Massachusetts, Jennifer played with the Springfield Symphony and was principal bass of the Vermont Symphony, the NH Music Festival, and the Mohawk Trail Concert Series. In Boston, she performed with Arthur Fiedler, the Boston Esplanade Pops, and the Handel and Haydn Society.

Later Jennifer moved to southern California and was principal bass with the Long Beach Symphony and for many years performed as a freelance musician in the LA area where she worked in film studios and venues from the Dorothy Chandler Pavilion to the Hollywood Bowl. She was regularly engaged by the LA Opera Theater, Monday Evening Concerts, the touring NYC Opera, the Roger Wagner Chorale, and diverse regional orchestras and chamber ensembles.

Jennifer has made the Twin Cities her home since 1986 when she came with her then young family. She soon found exciting performance opportunities with Theaters Latte Da and Ten Thousand Things. In addition to the Sinfonia, Jennifer performs regularly with the South Dakota and Duluth-Superior Symphonies, and the Arbeit Opera Theater.

She maintains a private teaching studio in her home and has also enjoyed many years of teaching on the college level on both coasts and in MN; she has been adjunct professor at Dartmouth College, UC Irvine, CA State at Long Beach, Macalester College, and Concordia University. She is also the coordinator of the Twin Cities Bass club.

When Jennifer is not performing, she enjoys the great outdoors and is an avid day hiker, boater, inline skater, cross-country and alpine skier, and snowshoer. She also likes to keep up her Spanish and listen to music.